Jim
Science Teacher
At a suburban high school
in PA

Jim is a science teacher at a suburban high school in PA. After using Remark Test Grading Cloud for a year, he decided to share his experience. Previously, he, like most of the other teachers in his school, either graded his tests manually by hand or used the school's single grading machine. Now, the addition of Remark Test Grading Cloud to his teaching process has changed the classroom for both him and his students. 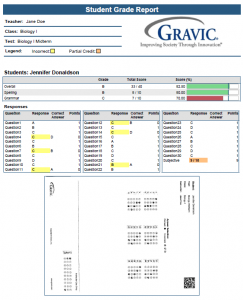 As an educator, Jim firmly believes that, “the ultimate goal in education is to keep these students improving”. It is this mantra that drives him to keep finding new ways to assess and correct his students’ mistakes in order to ensure that they are constantly learning. With Remark Test Grading Cloud, Jim gets a more in-depth look into grading each student’s exams. He found the results pages immensely helpful, as they allow him to figure out what each individual student does and does not know, as well as the best course of action for assisting them in the future.

“When I assessed my students on their learning, I could actually see exactly where they are. I could see the percentages, like you did well on this, but a lot of them did not do well on this answer and why”.  Jim recalled an issue in which all of his students were getting an answer wrong on a test. The software showed him that all of them were picking the same incorrect answer. He then discovered that they misunderstood one of his lessons, allowing him to single out the mistake and reteach it so that the students were no longer confused. Moreover, he sometimes finds it useful to let his students see the grading reports so that they can see for themselves where they went wrong. “They’re seeing where they’re making mistakes, and they’re becoming better students because of it”.

Not only does it show him what he needs to focus on in class, but Remark Test Grading Cloud also impresses administrators with easy to read results pages and saves valuable time during the busiest week of the year: finals week. “My colleagues were all in line for the grading machine, and I just cruise on back to the copier and scan in all my tests… I head back to my desk, I take the PDF, upload it into the program, and there’s my results. I’m done”. 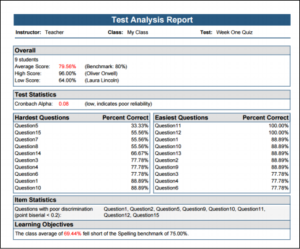 Overall, after one year, Jim concluded, “The ease of the program, the way it works, the results I’m getting… I don’t think I’ll go back to a traditional paper and pen assessment or ever use a grading machine again. I’m getting better results and I’m improving my students”.

Jim loves the versatility of Remark Test Grading Cloud. He can access everything at school or at home from his account – no more lugging around heavy paper tests. He can turn any copier or scanner into a test grading machine. The detailed reports provide an easy way to see how the students and class are learning specific concepts – making it easy to see who needs help and what topics require additional classroom time.