In this article, read how the Adams County Republican Central Committee conducted its annual delegate elections with overwhelming amounts of information, a time crunch, and Remark Office OMR.

The Problem
In the fall of 2011, the Adams County Republican Party Central Committee (ACRC) found itself in the position of having to plan for multiple district elections of Delegates and Alternates to be conducted at the Adams County 2012 Republican Assembly, which is an event planned to last only part of one day. The ACRC had to plan for election of several hundred Delegates and Alternates to four higher Assemblies/Conventions. The lists of candidates from all over the county spread to over 17 different ballot versions. Due to redistricting and reapportionment, the time frame for election preparation and reporting the results was severely compressed. Immediately after the County Assembly, the filing and reporting requirements for the State and Congressional Assemblies/Conventions left the ACRC with few options for conducting the necessary elections. Electronic ballot processing seemed essential. 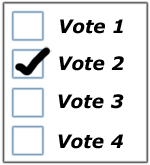 In the early part of this year, the ACRC Officers and relevant committees had planned to rent election-certified ballot-scanners from the AdCo County Clerk and Recorder Elections Office. They had also planned to have the ballots used with those scanners prepared by a commercial vendor. However, when the only available commercial vendor produced a quote for their services, it became apparent that commercial preparation of the ACRC ballots for use with the county’s rented ballot scanners was not an affordable option.

After much searching and consulting with various companies and organizations in a similar situation, it also became apparent that there simply aren’t any other affordable commercial alternatives available in the Denver region. They then decided to conduct some of the County Assembly elections using their own ballot scanning equipment and Remark Office OMR®. (There was a “backup plan” for manual tallying of the ballots, but that would have required more than one full day of effort by many volunteers, and the results would not have been available by the close of the County Assembly.)

ACRC used Microsoft Word to design and produce the various ballot versions needed for this complex election. Word is relatively easy to use for the sensitive and precise setup and formatting needed to print the ballots, and made it easy to import the candidates’ names for ballot preparation and printing.

Remark Office OMR was set up to record the marks for each candidate. The software was able to handle typical marking issues, such as marking sensitivity, cross-outs, blotches, erasures, etc. Individual ballots were identified through either optical character reading or barcodes, thus recording the ballot name, ballot number, or any other record data.

When it came time to scan the completed ballots, they used an Epson® scanner successfully. The software did its magic, and organized each ballot’s data as programmed by the set-up process. The software then reported the results and they were able to export the data to our Excel spreadsheet.

In summary they were able to use Remark Office OMR, MS Word and MS Excel to create their own ballots, scan them in and tally the results of multiple district elections of Delegates and Alternates at the Adams County 2012 Republican Assembly with a tight deadline and budget.